Meet the Board: Bill Mares

Food 4 Farmers has a talented board of directors who work diligently to further our mission to help coffee farmers overcome the tough months of seasonal hunger. These “Thin Months” occur every year when income from coffee farming runs out, and millions of families throughout Latin America cannot access enough nutritious food to feed their families. 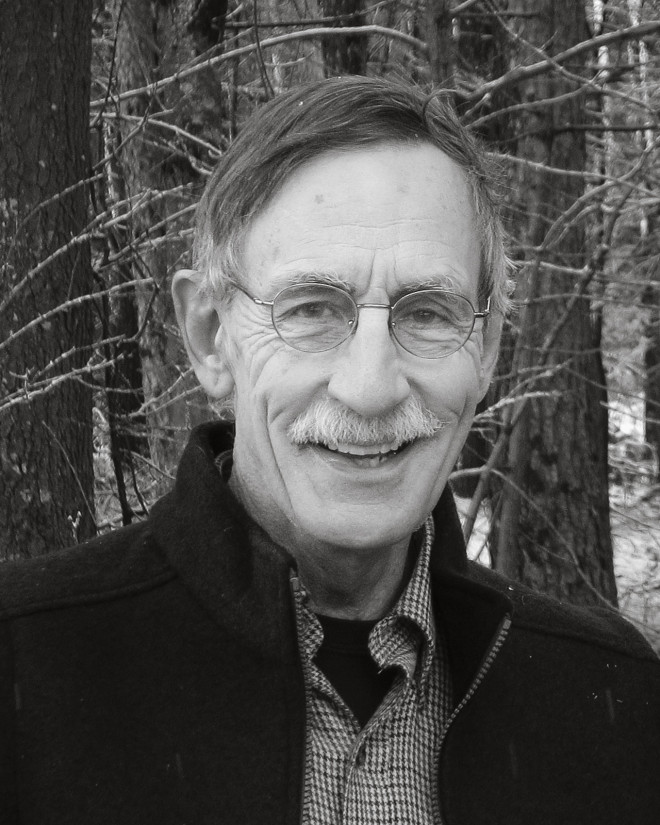 It turns out, honey is a great way for coffee farmers to supplement their income. This is where board member Bill Mares comes in. He’s been the president of the Vermont Beekeepers Association and the Eastern Apicultural Society, and holds degrees from Harvard College and The Fletcher School of Law and Diplomacy at Tufts University. In his varied career, Bill has been a journalist, high school teacher and politician, and has authored or co-authored 14 books.

We interviewed Bill for June’s edition of Meet the Board.

Bill Mares: Rick Peyser, Marcela Pino and Janice Nadworny had a meeting about six years ago, and either Rick invited me or I invited myself. That was the first time I heard about Rick’s plan to create a new organization focused on food security for coffee farmers. I thought, well this is a pretty interesting idea. I’ll stick around.

F4F: More than just sticking around, what motived you to get involved? 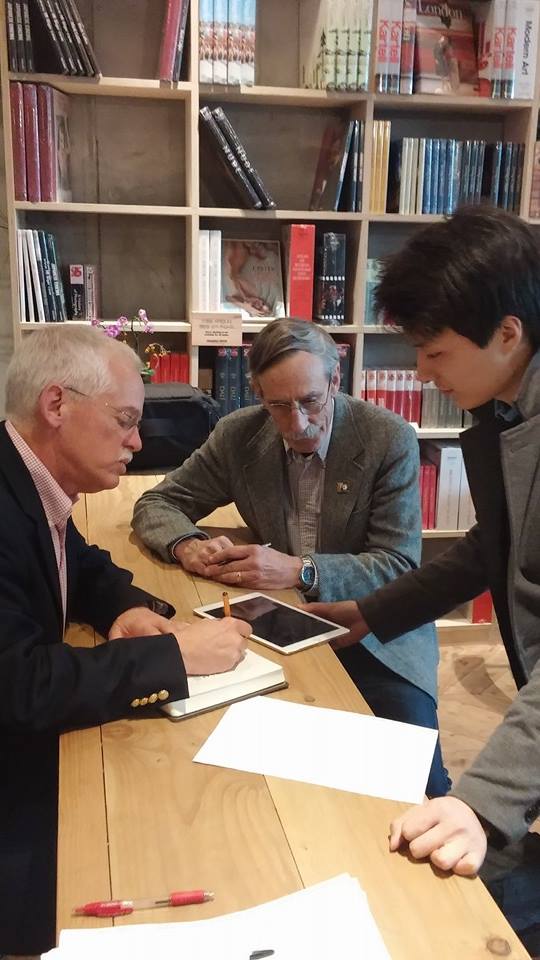 BM: By that time, Rick and I were writing this book about his life at Green Mountain Coffee Roasters, Brewing Change. A lot of the book is about Rick’s dedication to get Green Mountain to make big changes to promote a better life for farmers. At the time, I was on the board of Coffee Kids and I was also doing some work with bees, here and in Central America. My crusade was the idea of combining coffee and bees – to find a way to try beekeeping as one of the strategies that Food 4 Farmers would promote. I got involved because of bees and because I was a disciple of Rick’s.

F4F: Let’s go into beekeeping a little more. Why is beekeeping a good option for farmers looking to diversify their income?

BM: There are great benefits. First, farmers can sell honey or related products like pollen, propolis, royal jelly and so forth. It’s a cash crop that literally supplements coffee income. Second, the pollination from bees helps fruit and vegetable production wherever they are, and the honey itself is a much more nutritious sugar for families than cane sugar. From a tactical standpoint, the great attraction for me was that beekeeping was already a long-standing local practice in Mexico, Peru and other places in Latin America. This would not be a case of outsiders coming in and saying, “Ok, you guys have to try this because we know better than you.” My commitment was to figure out ways to work with established beekeepers, while helping coffee farmers new to the practice could learn more about beekeeping. The more time we spend talking about bees, the more coffee farmers we find who are already beekeeping. We hope to expand this program and figure out how to transfer that knowledge to many other people.

F4F: What is it about beekeeping that is so important to you? 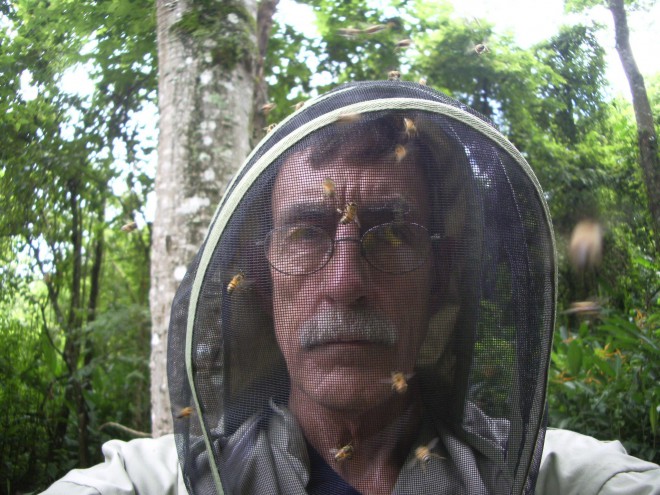 Bill has been a beekeeper for more than 40 years

BM: I’ve had bees for over 40 years, and I think they are endlessly fascinating. They produce these wonderful products — and they are also creatures that now require human intervention. They cannot survive on their own because of parasitic varroa mites, so there’s a strong connection and sense of stewardship among beekeepers. Honey bees are scientifically interesting, economically practical and I would say emotionally satisfying.

F4F: As a good friend of Food 4 Farmers’ co-founder Rick Peyser, you’ve had an interesting perspective on the coffee industry over the years. After being friends for so many years, what drove you to want to write a book about Rick’s time at GMCR – now KGM?

BM: I like to write books. I have written books with a number of people, as well as half a dozen by myself. Having known Rick for over 30 years, I was in awe of the consistency of his vision and his desire to help farmers. Listening to him talk about his travels, his involvement with various non-profits, his great memory and descriptions of people, I thought he had a great story to tell. It took me a couple of months to persuade him, and Brewing Change was the result. It was a great experience and I’m happy to say I was a part of it. 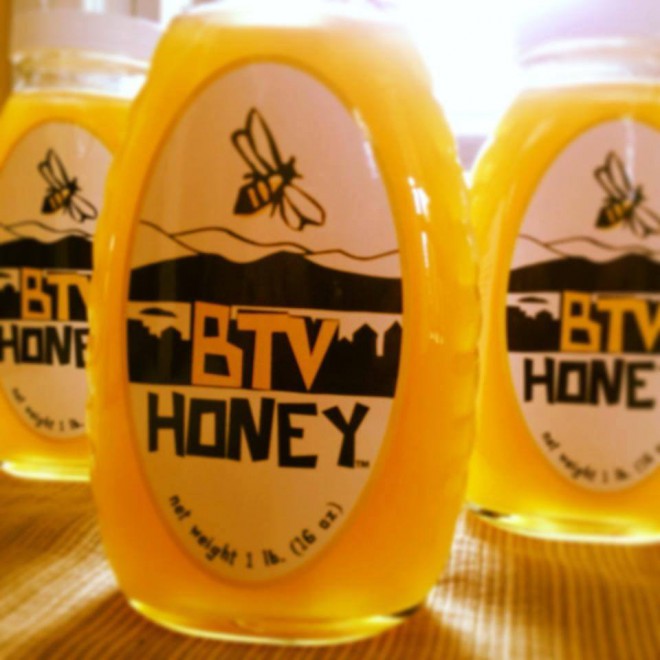 F4F: What was your process of writing Brewing Change with Rick?

BM: We looked at two big timelines: One was his work at Green Mountain over the past 25 years, and the other was his work with non-profits. Ultimately the chapters created themselves, but the process took about 4 years because Rick is always traveling. I’d interview him for about two hours on a particular topics, type it up, give it back to him, and say, “What do you think? What changes to do you want?” Sometimes I’d just make sure he agreed with it. We were pretty clear about what the chapters would be, and it was just a question of bulking it up. We hired someone to help edit, which was more substantive than grammatical, and when she gave us the OK, we submitted it to a New York agent, who rejected it. Then I asked Rick, “If you don’t mind just getting it published, and you don’t care about making a million dollars – let’s go to Wind Ridge Books in Shelburne, Vermont.” So, that’s what we did. They had a good editing process, were very helpful, and got it published.

F4F: That all sounds very organized — but if you’ve written books already, you would likely have developed some skills in this area.

BM: That did help. If Rick had a different perspective and wanted to make money, or get on the Tonight Show, I think it would have been much harder to find a publisher. I think we’ve done a pretty good job getting the book out there through the Specialty Coffee Association of America, and it continues to sell. And, it was a good experience for Rick, a nice capstone for his career at Green Mountain. 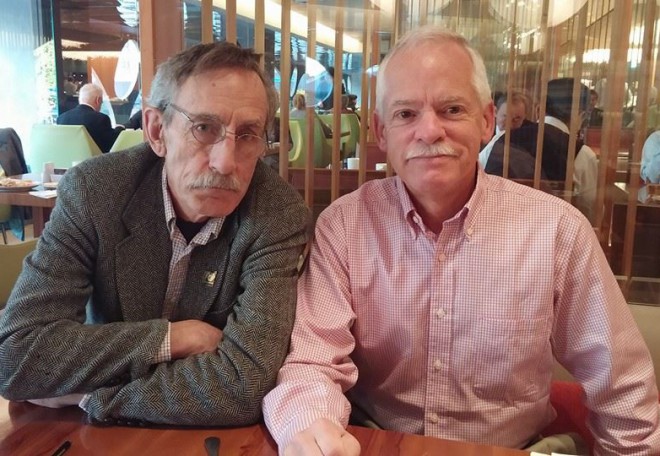 F4F: What was the best part of writing this book?

BM: As Gloria Steinem said, the best part of writing is having written and being done with it! Seriously, over this four-year process, I don’t think we had a major disagreement or a sharp word. I was happy to draw Rick out on certain topics, and I think he got into the rhythm of telling the story. I’ve had plenty of books with high points and low points, but this was just fun. It took a long time, but it was a fairly straightforward process.

F4F: Going back to Food 4 Farmers, what are your long-term hopes for the organization? 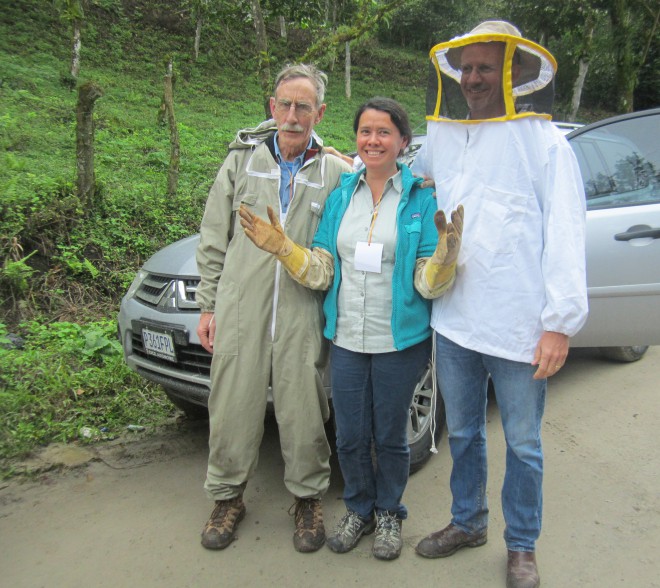 BM: I hope it can become the go-to non-profit with enterprising diagnostics. Selfishly, I’d love to have the beekeeping work go well and build something distinct and valuable. I’d like to see financial growth. With any non-profit organization, it’s a chicken and egg situation; you have to have a program to raise money, but you have to raise money to run programs. I think the board is extraordinary; we have strong, smart people with a range of expertise. There are no egos driving decisions, and when we come to the board meetings, we come to work. I don’t know how you monetize that, but it makes my affiliation with this organization a real pleasure.