Coffee and Honey: Changing the World Together

Bill Mares, a board member at Food 4 Farmers, recently traveled with staff to Chiapas, Mexico, to visit the beekeepers of CESMACH. He was instrumental in integrating beekeeping into our food security work and is a past president of the Vermont Beekeepers Association and the Eastern Apicultural Society. In this piece, he shares his experience.

I’ve been a fan of Rick Peyser for over 25 years. We’ve run marathons together. We walk our dogs together. We travel together. We’ve even written a book together, about his life in the coffee industry.

But he had one flaw, which I’ll talk about later.

I recently returned from a visit with the beekeepers of CESMACH, a
Food 4 Farmers partner, and witnessed the great strides they’ve made in improving the quality and volume of their honey production. For example, members Juan and Dalila have grown their three hives to 30, from which they harvested more than 1,500 pounds of honey last year. On the side, they’ve started keeping native stingless bees, which produce small quantities of high-value, medicinal honey.

Seeing this success and the confidence of the families reminded me of how beekeeping came to be such an important project for the farmers we work with. 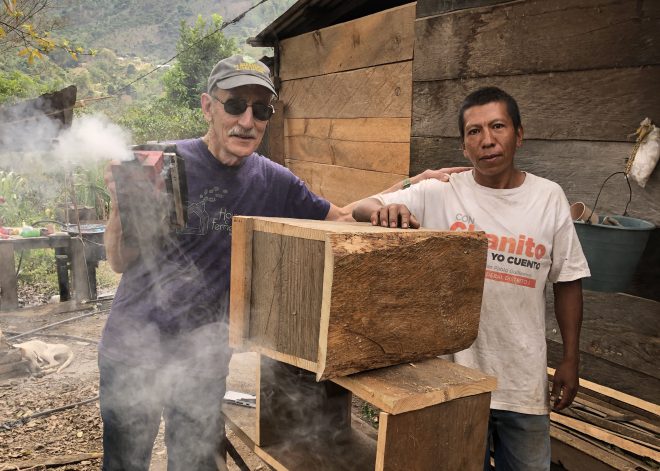 In 2005 I began what became nearly a yearly routine visiting Latin America to practice my Spanish and see new places. My first trip was to Panama with a beekeeper friend. I was curious about the “Africans,” or Africanized honey bees, also known as killer bees, which had displaced most indigenous species over the past 50 years. Almost all of the bees from Brazil to half of Texas were Africanized. These bees were mean, but they were also productive.

The next year I was in Oaxaca, Mexico, where I met Alfredo Contreras, a second-generation beekeeper and teacher with whom I traveled to remote communities to observe beekeeping techniques.

That was when Rick Peyser invited me to join Food 4 Farmers, his crusade to help coffee farmers build sustainable food security programs to get through “los mesos flacos” or the thin months, when nutritious food was scarce.

That first year on the board, I mostly kept quiet, but then began to wonder out loud if my beekeeping pastime might fit into Food 4 Farmer’s work. Maybe families could use the honey for both family nutrition and supplemental income, which could reduce reliance on coffee, whose widely fluctuating world price was beyond their control.

Rick was skeptical of the idea. Sounding like John Belushi on Saturday Night Live, he would tease me: “Zee Keeeler Beez!!”1

I stuck to my guns. I knew honey had a long tradition as a natural sweetener in Central America and later, as a valuable export. Even before the Spanish brought European honey bees to the Western hemisphere, indigenous peoples collected honey from native stingless bees. But honey production almost disappeared when the more aggressive Africanized honey bees took over.

I had virtually no experience with Africanized honey bees, despite 30 years as a beekeeper. But there seemed to be potential. Among the farmers I had met in my travels, they all wanted to produce honey for real income; there were no hobbyist beekeepers like here in the US. Maybe we could work with farmers in reviving beekeeping.

I approached the idea with caution. I didn’t want to be the outsider telling communities what to do. Food 4 Farmers prides itself on its participatory approach where solutions are developed jointly with the families we work with.

An Opening for Bees

I continued to travel to Central America with friends, particularly Professor Dewey Caron of the University of Delaware, who had written a book about Africanized honey bees in the Americas. We made some counter-intuitive discoveries:

In short, coffee farmers were already doing bees. What could WE at Food 4 Farmers add to those skills?

Food 4 Farmers’ specialty is helping communities identify the challenges around food security and working together to create solutions. We use our extensive network and contacts to collaborate on solutions and share knowledge. I realized this could be the key to applying beekeeping as a food security strategy.

In 2014, Food 4 Farmers began its beekeeping work in earnest. That year Root Capital invited us to help Maya Ixil, a coffee farmer cooperative in Guatemala, develop a model for communal beekeeping that could grow into an on-farm, co-op managed business to supplement coffee income.

We focused on reducing the attrition rate among new beekeepers, and embedding expertise within the community, so it could continue on its own. We brought my friend Alfredo Contreras to help farmers develop various products of the hive, like propolis and wax, as well as honey. Forty-three coffee farmers signed up for the program and trained for a year at the co-op’s apiary school before getting hives of their own.

Then in 2015, we started working with CESMACH, a coffee co-op in Chiapas, Mexico, that got its beekeeping start thanks to a Heifer International program. We partnered with Ecosur, an ecological college whose Bee Team was headed by the visionary Remy VanDame. The number of beekeepers grew from 50 to 85 with Ecosur providing a range of support to both beginners and advanced beekeepers, while Food 4 Farmers worked with the co-op to integrate honey production into their business model.

Reconnecting with the farmers of CESMACH and Ecosur this year demonstrated how far they’ve come. And Remy VanDame and other researchers have done impressive work showing the impacts that bees can have on the quality and quantity of coffee.

While visiting CESMACH, I met families with healthier kids and healthier pocketbooks, I saw their entrepreneurial skills blossoming into small businesses, and witnessed first-hand that it’s possible to overcome “los mesos flacos” with honey. It was great to see a guy go from one hive to 90 in three years. Another couple was selling two kinds of honey, pollen and propolis from their new home business, right on the coffee farm.

I felt energized by the people and their enthusiasm for bees and the evident profits they’re earning. I was impressed to witness the democratic participation and governance of these rural co-ops. When you factor in the scientific research at Ecosur and the financial training from Root Capital, the end result is a powerful model for success.

The Food 4 Farmers bee program still has work to do in helping farmers refine their testing techniques, establish financial controls, and develop potential markets both domestically and in the U.S. But the upside continues to grow.

I returned to Vermont, awed and proud to be part of this “hive” of activity of farmers, co-ops, trainers, donors, managers, researchers, advisors, marketers – one for all, all for one. Seeing my hobby help become the farmers’ business was gratifying.

And I have to thank Rick for co-founding Food 4 Farmers. Even if it took him some time to appreciate “the freakin’ bees.”